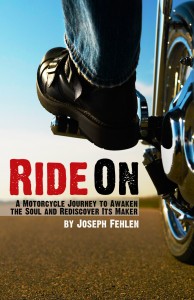 I have one brother.

I call him Joe.

But now that he’s kind of a big deal author, he likes to be called “Joseph.”

Joe currently is the associate pastor at Grace Foursquare Church in Rhinelander, Wisconsin.

Recently Joe wrote a book called “Ride On: A Motorcycle Journey to Awake your Soul and  Rediscover it’s Maker.” It’s available on Amazon: As well, you can purchase his book at his blog (www.agrowingfamily.com), or at West Salem Foursquare Church on the weekend of July 6/7.

I want to introduce you to Joe and his writings through this two-part Q&A. Enjoy…

JOHN:  As your brother, I know that you know nothing about mechanical things and you are not a gear head. What inspired you to write a book about motorcycles?

JOSEPH:  Yes, you are so true. The first thing you need to know is that Ride On is not a handbook on motorcycles maintenance, a travel book or an ‘I survived the Hell’s Angels’ memoir (I can neither confirm nor deny that I was a mole in a hard core gang). There are great reads out there on those topics.

Ride On is my story, which I tried to write in a fairly whimsical manner, yet straightforward story-telling mode, that explores my entrance into the motorcycle community and what I learned about life, faith and things that really matter. I was new to the community, in my mid thirties, and my eyes were aware of things that many may had forgotten after years of riding. Many had forgotten how and why they began riding.

It was at that point that I started to make these links between Jesus and motorcycles. The motorcycle became my vehicle to share the person of Jesus to others and give them tools to share Him with their friends. There were so many links that seemed obvious to me, but as I communicated them verbally to others they seemed to miss them. I knew at that point that I needed to write this book.

It was the bikers that followed Jesus that inspired me to get this on paper and ultimately to this point of a published book. They were asking me to help them share their faith in a real way to a community of people that many had pushed aside. So I immersed myself into the world and community of motorcyclist and kept my spiritual ears up for truths that could help them in their faith walk.

JOHN: What is the main point about the Christian faith you hope people would get from Ride On?

JOSEPH: I wanted to reintroduce (or introduce) people to a person named Jesus that we read about in the Bible. The problem is that for 2000 years we’ve added so much to Him and what He is about. I want to strip it back to the simplicity of who he is, what he did and what he said. Jesus is not some unattainable philosophy or a person that we have to completely figure out before we accept Him. He walked this earth telling people about His father and what life in this world is and should be like. He spoke in stories that had both practical and spiritual implications. So everyone that heard got something that could help them… and that is what I tried to do in Ride On.

You will notice in my writing I don’t have any direct quotes or indented scripture references. When I reference Jesus, He is just a continuation of the story I am telling. He is part of my story and I think He can be part of other’s stories as well. I endeavored to share about Him in a natural way because most people, when talking to their friends, don’t recite Scripture. No, we just tell the story of what Jesus did and what He is doing in our lives today. [I do have endnotes if people want to look further into what I am saying.]

So I guess the main point is… Jesus. Not religion, not rules, not your grandma’s church, but Jesus. He is the one wire we need to hook into to get our life on (or back on) track.

Be watching for Part 2 of this Q&A coming soon.