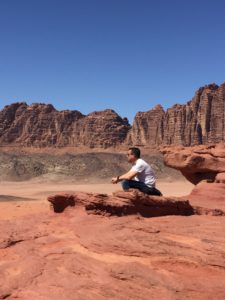 It’s not uncommon for me to be dreaming and planning 2-4 years out. Part of being the leader of an organization is that I have to regularly “forward-think” in order to effectively, well, lead.

Here’s a few examples:
• I’m thinking about leading the charge on a multi-church event for 2020.
• I’m trying to nail down dates for a Greece/Rome/Turkey journey in 2018 as well as another Israel trip in 2019.
• I’m working on my next “ManDate” with Isaac when he turns 18. It needs to be epic. As well, I’ve been thinking about taking all my boys (Jordan, Josh and Isaac) on a collective “ManDate” somewhere overseas as a capstone to all the previous “ManDates” we’ve been on. That too needs to be epic.
• I’m pondering on what to do for our 30th wedding anniversary. We just celebrated 25 years, but, I’m a guy and I think I have to keep topping the last milestone!
• I’m praying about future campuses or church plants that could be birthed out of our congregation in the next 5 years.

All that to say…there are times that my brain can hit the point of exceeding it’s bandwidth. You know that “spinning ball of death” on your computer screen that lets you know the your hard drive is stuck or shutting down? Yah, I feel that some times. And in the process of the good work of forward thinking and dreaming, I’ve discovered that what is affected most are the day to day, moment by moment things.

I’m certainly not saying that long-term planning is bad or unfruitful, but it shouldn’t take the place of short-term obedience. When God called Abram in Genesis 12, He told him to “go from your country, your people and your father’s household to the land I will show you” (emphasis mine).

This denotes an ongoing awareness of God’s presence and an obedient response to His progressive leading. Abram wasn’t show the entire map. He wasn’t given the full picture. It’s quite possible that if he HAD been shown the entirety of God’s plan for his life it would have “exceeded his bandwidth.” Abram, instead, had to obey the Lord and trust His leading at every juncture of the journey. Of course, he had moments of failure. Don’t we all.

This is an important pattern for us today. Build an altar. Call on His Name. In other words, slow down and sit with God. Listen. Worship. Pray. Fast.

God “will show you” which way to go. It may not be the direction that you and I plotted out on an Excel spreadsheet, or blocked out in iCal. It doesn’t mean that we should never forecast, dream or think into the future, but our long-term planning can never become a substitute for our short-term obedience.

Reminds me of Psalm 119:105 when it says, “Your word is a lamp for my feet, a light on my path.” We would all love to have one of those high wattage, blinding spotlights that would illuminate way out ahead, revealing everything about our future and the direction of our lives. But alas, we have a lamp, and that lamp gives us enough light for each step, and the immediate path we’re on. This requires us to be aware, attentive and responsive to the moment.

Curiously, when we are obedient to the Lord in the day to day, moment by moments things, He has a wonderful way of getting us “to the land I will show you.” It may take a while but what He promised He will perform.