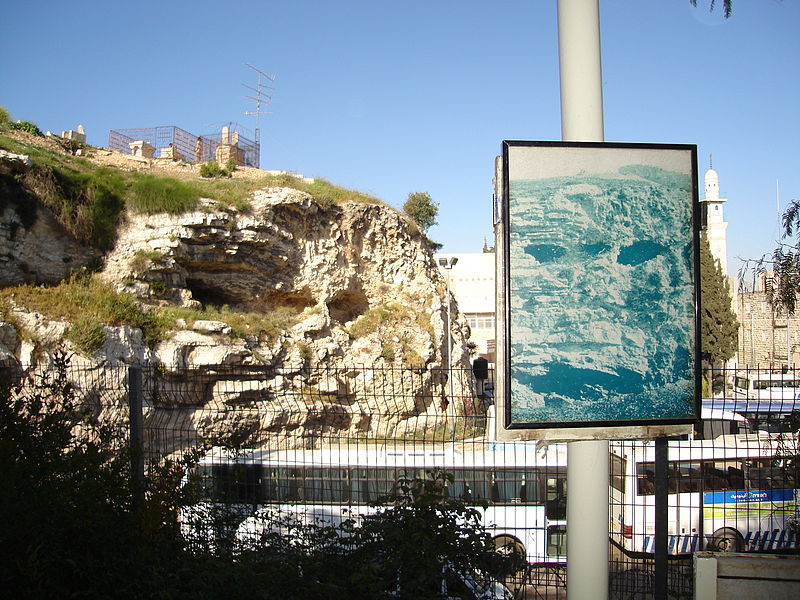 Today is what is known as “Good Friday.” It’s the day that commemorates the death of Jesus Christ upon a cross at Calvary. Calvary is also called “Golgotha,” which means “place of the skull.”  It is a literal hillside immediately outside Jerusalem’s walls. This photo captures what it looks like today, along with a side-by-side display capturing it prior to heavy erosion and excavation.

A really horrific event took place on this site (or one quite similar to it). The death of Jesus was unjustified and unbelievable. It was grotesque. Friends, it’s really difficult to reduce the crucifixion to a charming story, complete with chocolate candy, bunnies or a gold crucifix necklace.

Jesus was an innocent man subjected to a trumped-up trial, followed by agonizing punishment. He was mocked with a crown of thorns on his head and he was hailed by his tormentors as a king. Pontius Pilate, realized he was presiding over a major injustice, looked for some way to release this man in whom he could find no fault, but decided instead to go along with local opinion. Jesus was nailed to a wooden cross and died.

So, it doesn’t seem like there is much good in this series of events.  Or is there? Here are five good things about Good Friday.

1.  Jesus’ death was the perfect sacrifice for our sins.

Hebrews 9:22 tells us that “without the shedding of blood there is no forgiveness of sins.” Simply put: someone had to die. Only a perfect, sinless sacrifice would suffice, and that certainly rules US out. Jesus, as the only sinless person to ever live, fit the bill exactly. His sacrifice upon on the cross paid it all!

2.  Jesus’ death reminds us to not rely on our own strength.

Luke 23:46 captures some of Jesus’ final words on the cross as he said “Father, into your hands I commit my spirit!” This was a cry of submission and surrender. The Apostle Paul understood this when he said in Galatians 2:20, “I have been crucified with Christ. It is no longer I who live, but Christ who lives in me.”  We can learn from this. A good thing about Good Friday is that we have an annual reminder to submit and surrender to God’s strength.

3.  Jesus’ death is an expression of God’s passionate love for us.

Romans 5:8 tells us that “God shows his love for us in that while we were still sinners, Christ died for us.” The most famous scripture of all time, John 3:16, echoes this: “For God so loved the world that he gave his one and only son…” No greater love has anyone shown than to lay his life down for a friend. That’s what God, through Jesus, expresses to us.

4.  Jesus’ death reconciles us to the Father.

Romans 5 goes on to say in verse 10 that “while we were enemies we were reconciled to God by the death of his Son….” This means that you and I have been justified (just as if I’d never sinned), and redeemed (bought back from the enemy), and positioned as a child of God (rather than his enemy).

5.  Jesus’ death was a sweet set up for his Resurrection.

The best good thing about Good Friday is that it’s a launch pad for Easter. Tony Campolo famously said, “It’s Friday, but Sunday’s Coming!” Death is swallowed up in VICTORY. Just when you think all is lost, there is the hope of the resurrection. That’s good news for modern man.